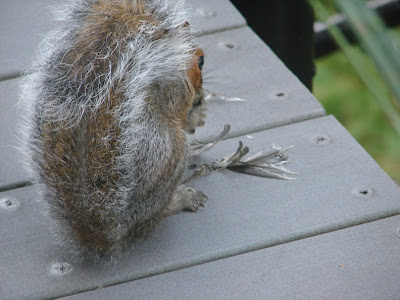 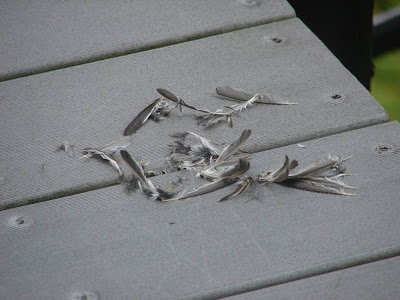 Yes folks, I'm sorry to report something that appears to contradict what I've been saying about squirrels. These pictures are hard to believe, but another friend in New Jersey took them so I know they're for real. As I've said in the past, squirrels are vegans, and it's rare to see one eating animal flesh. ( Though you never know about squirrels living on the wild side over there in New Jersey. They are, after all, not city squirrels.)

This is the friend who has the nest of 4 baby squirrels just outside her second floor window. She discovered a squirrel that's most likely their mother, eating a goldfinch that had been dragged to the deck and left for dead by her cat. As you can see, she stripped it pretty clean before running off with it. At least the squirrel didn't murder the bird! It would surely go against a squirrel's delicate sensibilities to kill another animal (how many other members of the animal kingdom can we say that about?)

So in all likelihood the mother must have been feeling quite famished after the long job of nurturing 4 babies, and without getting proper nutrition for herself. That's a lot of mouths to feed!
Posted by Admin at 4:33 PM