Wouldn't that be nice? Just say goodbye, bully!
﻿
The only problem is,  "home" is the orange tree, which was the home of Red Momma and Alphie and  countless other squirrels before they were all evicted. ET sits over there now, guarding the castle in solitary splendor.
﻿

﻿
It must be pretty lonely. I usually find ET sitting all alone, either by the orange tree or in the cherry trees. The idea of occupying a tree seems to be more of a female than a male quality, but I'm 99% sure that ET is a male. I don't think there are any babies up in that tree!

Yesterday ET smashed into this lovely orange-gray squirrel whose only crime was trying to grab a  peanut from me, and slammed the squirrel against the fence. Ouch! 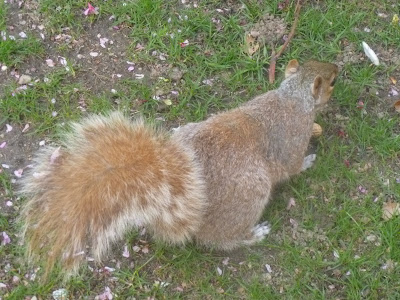 Then he looked up at me with that innocent I-did-nothing-wrong face, as if to say, give me that peanut! Then he tried to prevent me from feeding Alphie by jumping in between us. No wonder most squirrels keep their distance! This squirrel is a total psychopath.For anyone who remembers, this is Mr. Operator on Steroids.

I used to think Alphie was bullying the other squirrels, and it seemed so out of character with his sweet nature,  and then one day Alphie he got his tail broken (probably in confrontation with ET) and then I realized that it had been his doppelgänger that was the terrorist!