Bernie found Blackie this morning on the ground by the tree where we had last seen him. Dead. I feel so sad. Blackie was a beautiful young squirrel, with an unusually soft, glossy coat that had a chenille-like quality, as can be seen in the picture. So cuddly looking, yet this little honey never got cuddled. 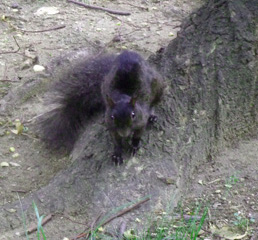 When I first saw Blackie, his left rear leg and foot were infected and swollen and his foot was ballooned up to twice the normal size  and red. As soon as I started feeding him the foot came down to normal size. I fed him regularly, as each day he came up to me at around the same time, and ate a wide assortment of nuts. 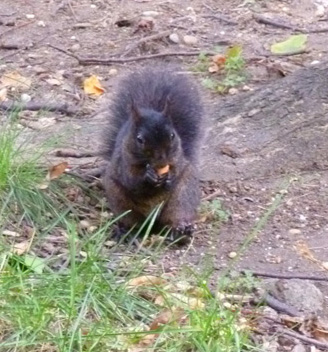 By the time I took these pictures I thought his foot looked much better, but his leg was still a problem. 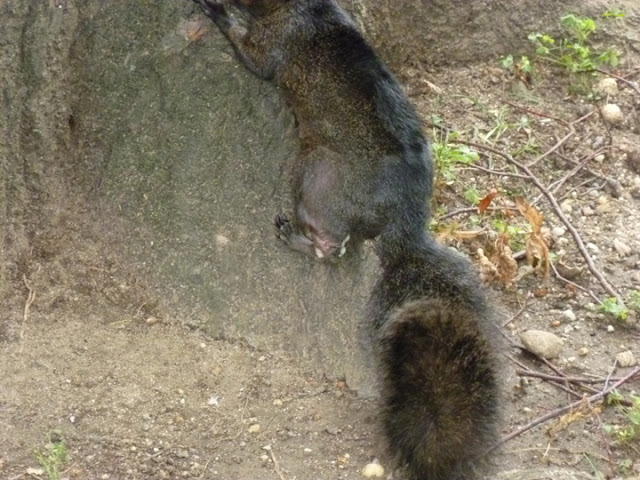 He seemed to be improving, and then we had several days of rain when he didn't get fed. and next time I saw him he seemed weaker. Bernie saw him, thought he was badly infected and that we should try to catch him. Unfortunately he escaped the net and ran up a tree, and  I feared that he became so terrified that he'd never come down again. Well that seems to be the case. I've been going to that tree each day feeding 2 small babies that live there, hoping that he was still in that tree and that he'd come down eventually, but he didn't. Then this morning Bernie found his body by the base of the tree. He suffered and died alone, without ever being cuddled.

A few days ago, as we walked around searching for our squirrels, we encountered a lady who asked us, where do squirrels go when they die? This was actually a question I had often asked when I first took an interest in squirrels, and before I'd been initiated into their mysteries. But normally we don't see them when they die. So the fact that Blackie lay there on the ground was a sign to me that he was saying goodbye, and telling us that we didn't have to search for him any longer. Goodbye, Blackie.